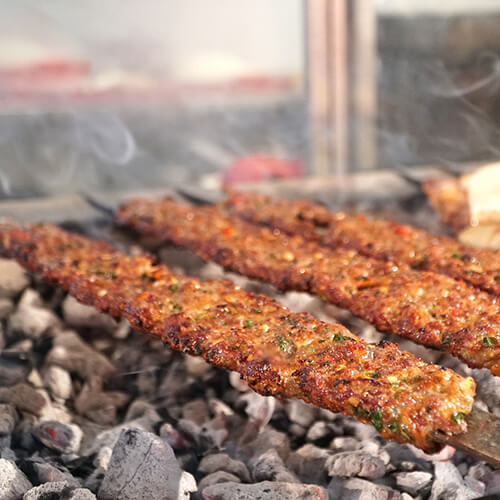 When it comes to Adana Cuisine, the first thing that comes to mind is Adana Kebab.

The most important secret of Adana Kebab, which was registered and protected by the Turkish Patent Institute, is the magnificent taste of meat. After the meat is removed from the nerves, it must be rested and armor minced. We strongly recommend that everyone who visits Adana should taste Adana Kebab, which turns into a visual feast with the salad and appetizers served with. 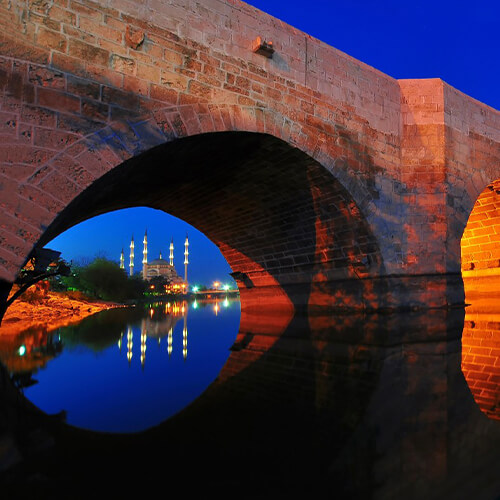 It was built in the age of Roman Empire in Adana and it is a prominent symbol of the city. Taş Köprü was built by Roman Empire 1700 years ago, and it is the oldest bridge in the world that is still actively used. It was pedestrianisated after the restoration in 2006. It is 319 meters long and 11,4 meters across. Of 21 round arches of the bridge, 14 is still visible today. 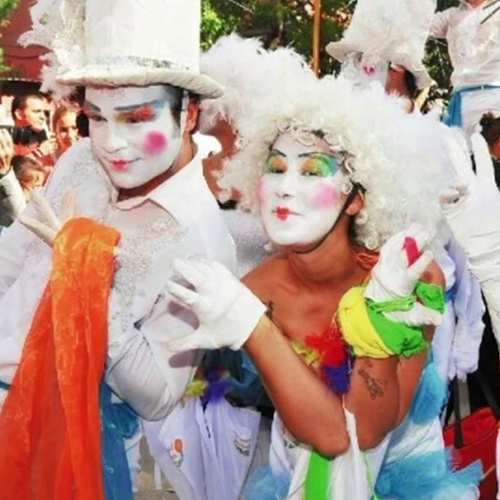 April is an amazing month in Adana.
Spring arrives earlier to this town than it does

to most other parts of the country. Early April, when the scent of the charming orange flowers dominate the city and seduce the people of Adana, they now also know that the most looked forward event of the year is soon to arrive. The Orange Blossom Carnival!Thanks to the profound participation of the people of Adana, Carnival turned into an amazing period of fun and creativity shared by tens of thousands of people. 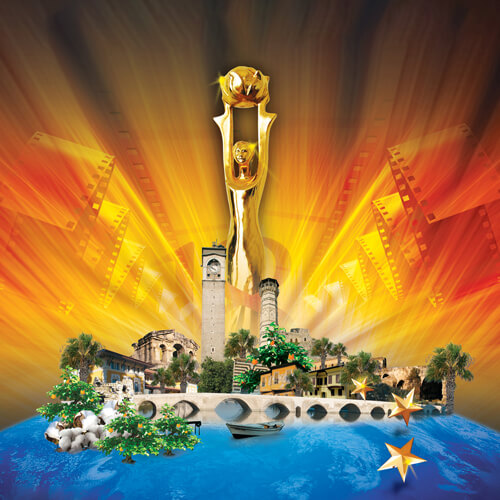 first time in 1969 It was held under the leadership of Adana Municipality and Adana Cinema Club. The Golden Boll Film Festival, which also received the contributions of the Turkish Film Archive, not only Çukurova, but also with its content that has been enriched every year since then. became one of the most important cultural and artistic events of our country. 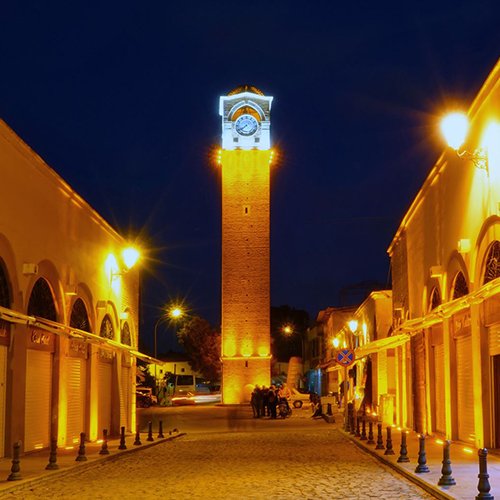 during the time of Adana Governor Abidin Pasha. 32 meters high, which is Turkey’s largest clock tower building is made of brick and stone cutting. 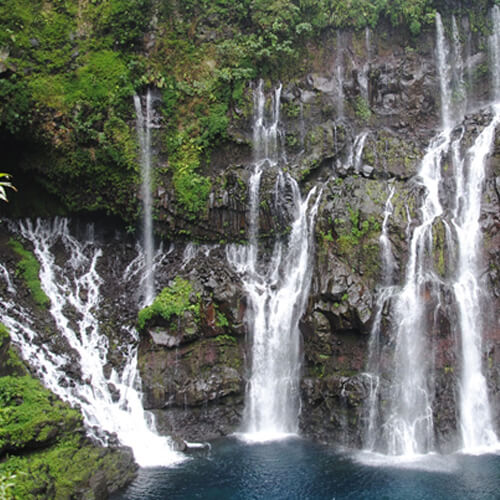 Aladağ Cube Waterfalls, 37 km from Aladağ region and comprising of 10 cascades, has a

serene air where the hints of fowls meet with backwoods that take on totally various hues in four seasons. The individuals who need to be separated from everyone else with nature should visit these cascades on their Adana trips. 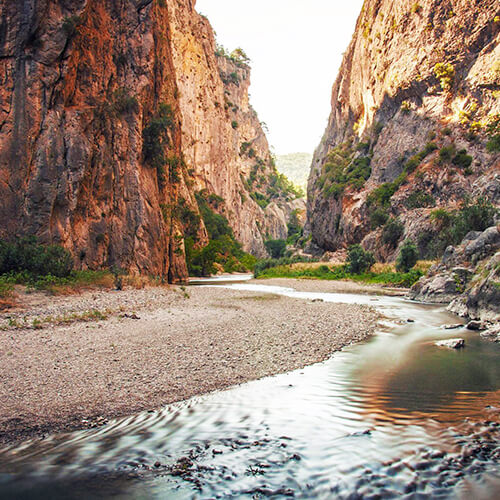 Çakıt stream passes through the middle of the canyon, which is about 200m high.

7 kilometers of the 20km long canyon is open for walking. 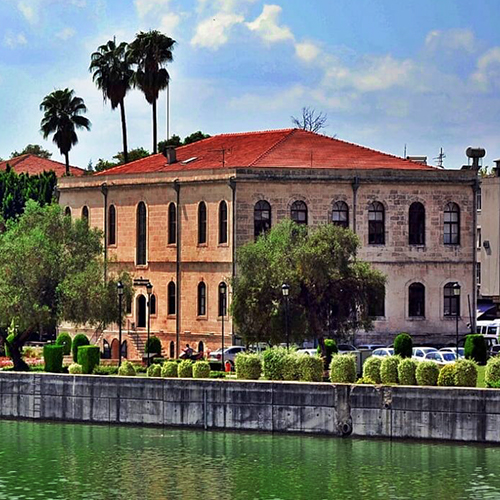 It is located in the south of Stone Bridge, on the banks of Seyhan River.

It was built as a Military High School between 1881 and 1883 by the Governor of Adana, Abidin Pasha, during the resign of Sultan Abdulhamit. It served as a boarding Girls High School from 1932 to 1998. The building, restored between 2005 and 2006, was opened as a Culture and Art Center. 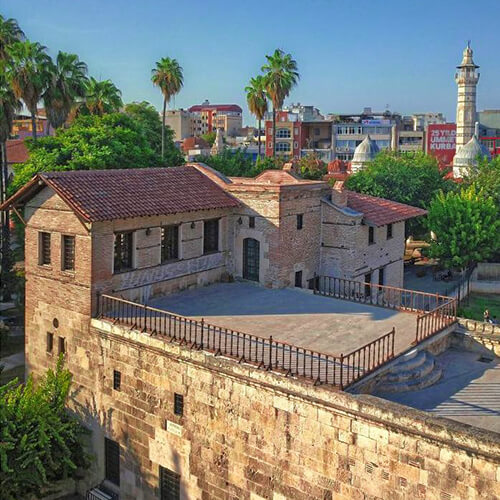 It is the oldest residential building in Adana. It is located within the Ulucami complex.

The mansion was built by Ramazanoglu Halil Bey in 1495 according to the inscription on the entrance door. It is stated in the sources that it is a tall and large building. It is known that Yavuz Sultan Selim stayed here for three nights on his way to Egypt and Murat the 4th on his Baghdad voyages. 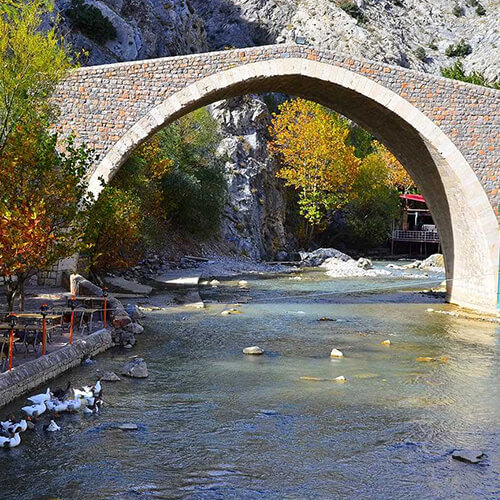 Pozanti, which has been a transition zone throughout history, witnessed important

historical events. Pozanti, which served as the administrative center in the liberation of Adana, started to developed after the Republic. Ak Bridge, named Akköprü, also called Şekerpınarı Birdge due to location. It’s a medieval bridge. The term medieval period is not a specific date, it covers a very wide period from Romans to Faith Sultan Mehmet. 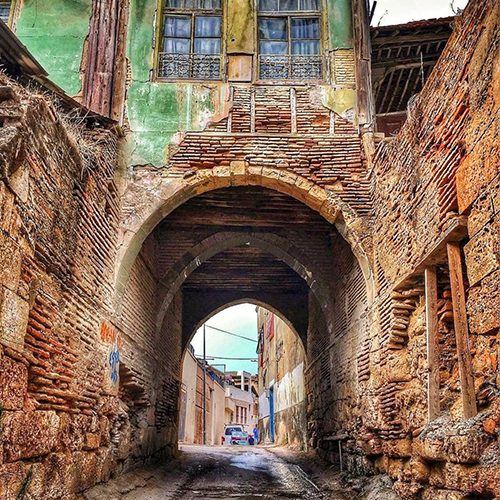 The history of the neighborhood, which was established on the mound,

which is the only elevation, of the city in order to protect from the flood caused by the Seyhan River, goes back 4000 years. A statue of Nurse Sitsnefru(Satsneferu) of the Middle Kingdom Period 12th Dynasty (1900BC) in Egypt, exhibited in the Metropolitan Museum of Art, New York, was found here. It is possible to see historical houses and streets peculiar to the region in the neighborhood.

It is in Akoren town of Aladag district. There are two settlements named Akoren 1 and

Akoren 2. It is understood from the many church remains that have survived that the region was used as a religious center. The apse of the church and some of its outer walls are standing. 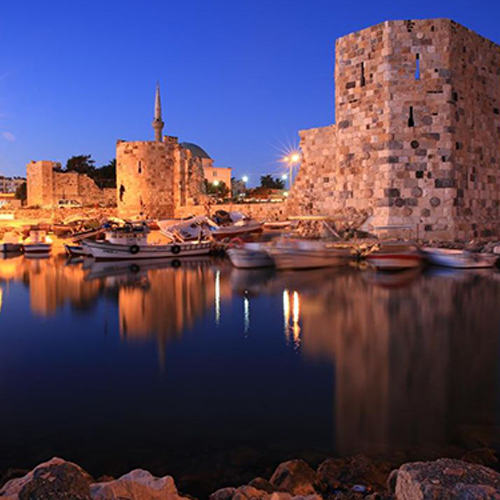 It was used as a strategically important naval base. One of the three biggest Aclepius

Templates of the ancient world is in this city. The city’s health center, Asklepion, has a worldwide reputation. The visible ruins of the city are Ayas Harbor Castle, Sea Castle, Suleyman Tower, the ruins of the city walls, the ruins of the baths, the street with columns, the rock tombs and sarcophagi, votive stones, round altars, pipes, sculptures, millstones, inscriptions and architectural building elements.

It is an important castle located on the Ceyhan River, 40km east of Adana.

It is one of the Crusader castles built in the 11th century in the middle ages. While the name of the castle, which was abandoned since 1357 during the Ramazanoglu Principality Period, was Kovara, the famous Turkish traveler Evliya Celebi, who passed here in 1671, introduced the castle as the Shahmeran Castle. 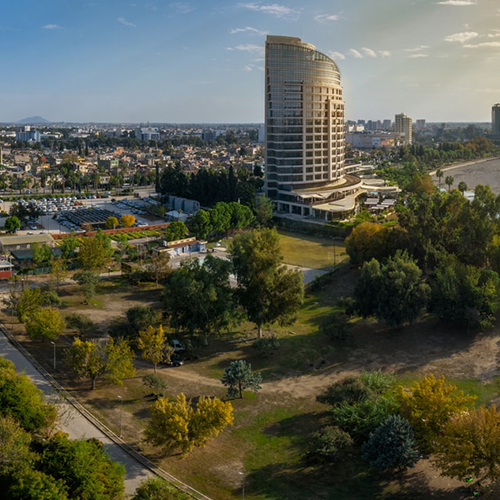 It is one of Adana’s metropolitan central districts. Seyhan River passing through

the middle of Adana separates Yuregir and Seyhan districts. Yuregir, the central district of Adana, become a municipality on June 5,1986. It was named after the Turkish Oghuz tribe, who settled here, between the years 1250 – 1352. It is the most immigrant district of Adana. 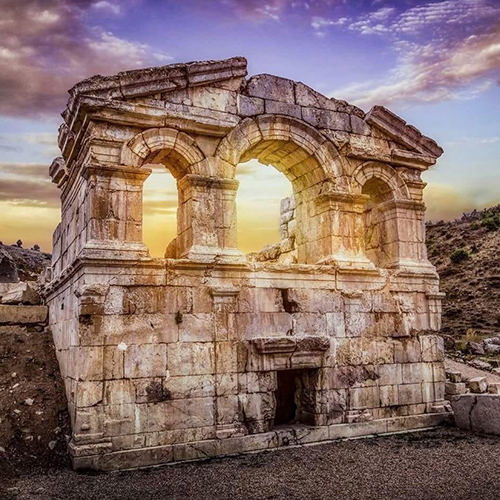 The ancient city is within the borders of Sar Village, which is 20km away from Adana’s

Tufanbeyli district. It is a settlement belonging to the Hittite, Roman, Byzantine and Ottoman periods. It is an important religious center in Kizzuwatna and the Hittite period. Roman works have survived in the region. Theater, Heroon (Broken Church), Corinthian Temple (Ala Kapı) are among the important historical remains. 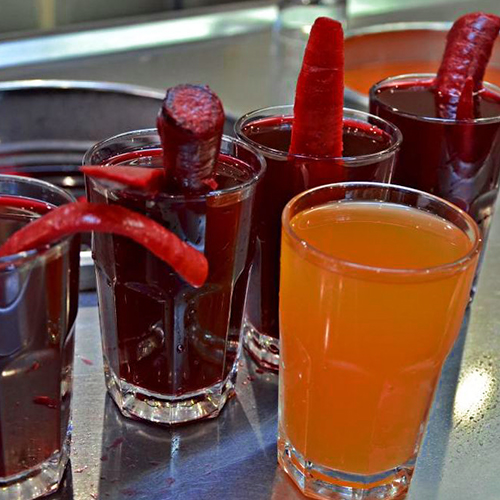 Turnip juice is a popular beverage of southern Turkey, originating from Adana.

Although its Turkish name Salgam suyu (or shortened, salgam) does literally mean “turnip juice”, it is, in fact, the juice of purple carrot pickles, heavily salted, spiced and flavoured with aromatic turnip (Salgam) and fermented in barrels. It is traditionally served cold in large glasses with long slices of pickled carrots, called tane. Hot paprika relish is added just before drinking. Hot or regular, it’s a popular drink with Adana Kebab. 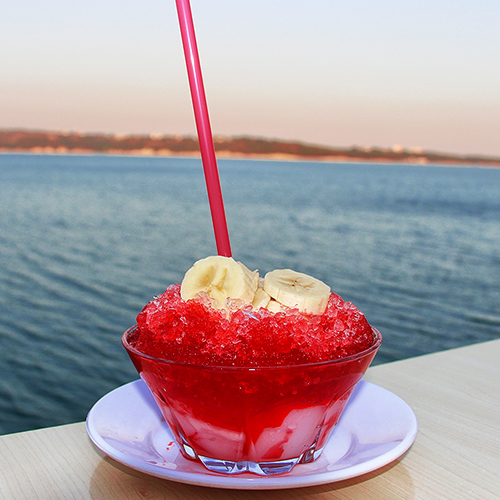 It consists of grated ice, starch, powdered sugar and syrup. It is very light and refreshing dessert. 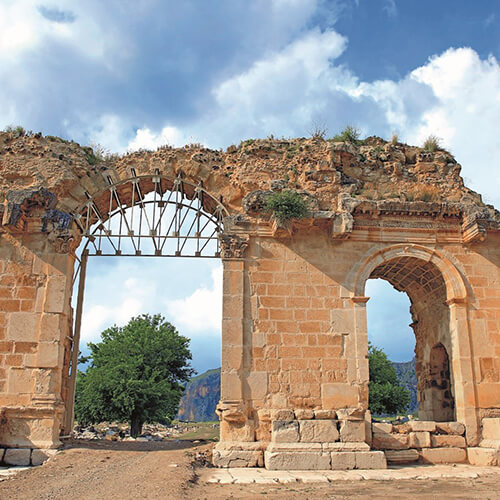 M.S. Anavarza, which started to live in the 2nd century,

became an important city in time and gained the title of Cilicia Capital in 408. 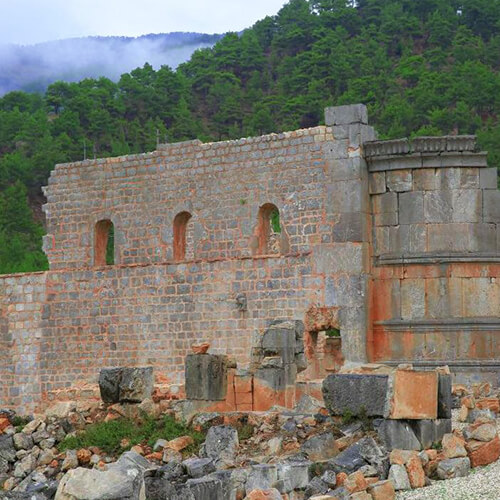 The castle located on a steep hill 6km northeast of Feke district center,

was buildt by the Byzantines in the 12th century.

The history of Adana goes back 3,000 years; Archaeological findings in the region have revealed human settlements dating back to the Palaeolithic Age. Tepebag Mound, where archaeologists found a stone wall and a city center, was built in the Neolithic Age and is considered to be the oldest city in the Cukurova Region. A place called Adana is mentioned in the Gilgamesh Epic, one of the Sumerian epics; however, the geography of this study is too ambiguous to determine the location of the aforementioned place.

According to the Hittite Kava inscriptions found in Hattusas(Boğazkale), Kizzuwatna was the first kingdom to rule Adana under the protection of the Hittites around 1335 BC. At teh same time, the city was called Uru Adaniya and it’s inhabitants were called Danuna. In the years between 1191 – 1189 BC, with the collapse of the Hittite Empire, the western-based raids caused the control of the plain to pass to many small-scale kingdoms. Persians, Alexander the Great in 6th century 333BC, Seleucids, Cilician pirates, Pompey the Roman Empire man, and the Cilicia Armenian Kingdom (Kingdom of Cilicia) had a say in the conrtol of the region.

Adana’s history is essentially related to the history of Tarsus, since the location of these two cities adjacent to the Seyhan River was changed by the river, these cities are ofteh referred to as the same city and the names has changed according to the course of centuries. During the Roman period, Adana was of relatively little importance and at that time Tarsus was the metropolis of the region. In the period of Gnaeus Pompeius Magnus, the city was used as a prison for theCilician pirates. A few centuries later a local station was established in the city on the Roman Military road going east. Following the decisive collapse of the Roman Empire in AD395, the region became a part of Byzantine Empire and probably flourished during the resign of Julianus. With the construction of large bridges, roads, government buildings, irrigation and nurseries, Adana and Cilicia have become the most important and developed trade centers of the region. Especially during the Cilician period, Ayas(today’s Yumurtalik) and Kozan (formerly Sis) were the other major cities and administrative centers in the region.